The sister of 'Abdu'l-Baha and the daughter of Baha'u'llah.

thought this photo was remarkable,
and, for various reasons worthy of sharing 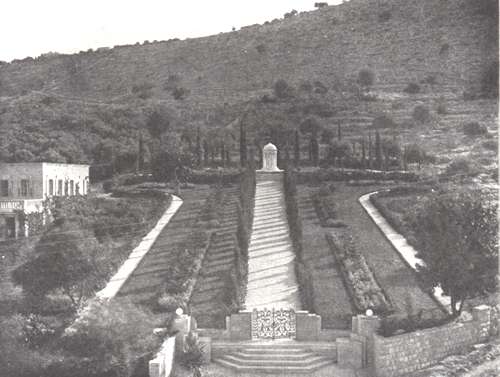 was this the first permanent Baha'i structure on Mount Carmel ?

If not what then what was ?

Is there a list of what structures were built when ?

any comments whether directly related or not would be appreciated.

will have to look up birth records ...

She died on 15 July 1932 was buried in the Bahá'í gardens below the Bahá'í Arc on Mount Carmel not far from her two brothers and mother. The shock to the administration meant that religious festivals were suspended for nine months[4].

The Monument of the Greatest Holy Leaf was built in her memory at the Bahá'í World Centre.

yes ... harmonized structure ... interconnected in ways that few can fathom ...

" ... the need of the Fund associated with the name of the Greatest Holy Leaf, initiated in order to complete the exterior ornamentation of the House of Worship in Wilmette, Illinois ... "
Top

"Concerning the suspension of festivities for a period of nine months it should be made clear that what is meant by this is that all gatherings, whether outdoor or indoor, which are not of a strictly devotional character should be abolished all through the period of our mourning. However, meetings and services that are wholly spiritual as well as those that are necessary for the carrying on


of the administration should continue to be held as usual"
Top

yes ... a list of structures ... when started and when completed ... on Mount Carmel would be appreciated
Top

this has been about my first time reading about Bahíyyih Khánum

I had glanced at the material before ... but never read.

"In the innermost recesses of our hearts, O thou exalted Leaf of the eyes Paradise, we have reared for thee a shining mansion that the hand of time can never undermine, a shrine which shall frame eternally the matchless beauty of thy countenance, an altar whereon the fire of thy consuming love shall burn for ever."
Top

Have you read Door of Hope? Author : Dr David S Ruhe
It might be in there, because that book is about the history of the Bahai faith in israel

I myself havent read it... Ive just bought it and keep flicking though because they have loads and loads of images.
I can have a proper look for you in that book tomorrow and let u know.
Top

british_bahai wrote:Have you read Door of Hope? Author : Dr David S Ruhe
It might be in there, because that book is about the history of the Bahai faith in israel

I myself havent read it... Ive just bought it and keep flicking though because they have loads and loads of images.
I can have a proper look for you in that book tomorrow and let u know.

yes ... if you do have a chance ... please do look through the Door of Hope for me, for , as of yet, no copy of this book has reached my hands

yes ... lots and lots to read ... indeed one of the reasons we like Libraries like this ... yes

hmmm ... truly inspiring how the pen of our Guardian and the life of Bahíyyih Khánum are such complements to each other ... unfathomable the amount fortitude such individuals demonstrated for us to obtain ... a tremondous model of behavioral relationships for all to have blessings from ... what undescribable grief was their joy to bear so that we might find Him ... within our hearts ... singing triumphantly ...
Top

Correct: the first structure had to have been the Shrine of the Bab because 'Abdu' l-Baha built it, while Bahiyyih Khanum lived into the 1930s.

I do recall in a video the that Ruhiyyih Khanum explained how central the shrine of the Greatest Holy Leaf was to Shoghi Effendi's planning of the gardens....

brettz9 wrote:I do recall in a video the that Ruhiyyih Khanum explained how central the shrine of the Greatest Holy Leaf was to Shoghi Effendi's planning of the gardens....

It's almost literally so given that it's very nearly in the center of the Arc!

(A short distance away from the center, but definitely the nearest structure to it.)

" ... he never ceased to remember her, to associate her with the unfoldment of the Faith throughout the world, the rise of its institutions at the World Centre, the largest or smallest of his own undertakings; whether publicly or quietly in his personal life, her memory and influence were always there. "

yes Bahíyyih Khánum our thoughts are again turning to you ...

how strange it is to contemplate how all earthly endevours end up in a tomb
and yet, your spirit, our love, flows not from the grave but from years of constant marytyrdom

yes Bahíyyih Khánum
what joy you must have brought to your Father, our Lord.
smile !

it just seems so strange to me ... the male/female side of things

BruceDLimber wrote:It's almost literally so given that it's very nearly in the center of the Arc!

I think to make a list, you would have to go through all of the Guardian's writings to see when the buildings were done. I don't know of any such list, so you might well have to make your own. You might also check Dr. Giachery's book about the Guardian.

Another building on Carmel built around the same time was the House of Abdu'l-Baha, farther down the mountain. Another early building was the Eastern Pilgrim House built by Mirza Jafar. You can read about it in Dr Ruhe's book and in Mrs. Khadem's book about the Hand of the Cause Mr. Khadem. These three were all built in the days of Abdu'l-Baha.

The Western Pilgrim House across the street and up the hill from Abdu'l-Baha's house was started during Abdu'l-Baha's lifetime but finished years later by Mrs. Collins, in the 1940s or 1950s I believe.

There is also the Old Western Pilgrim House across the street and down the hill from the House of Abdu'l-Baha. I do not know if it was built by the Baha'is as a pilgrim house, or if it was purchased and used for that purpose.

Another building, a very humble building, is a workshed near the Shrine of the Bab. It was used by the caretaker, and I heard that after his passing, the Guardian said that the man's services had been so devoted, that his workshed would last as long as the Shrine did. So he arranged for it to be moved several times during the work on the Shrine and gardens, and it is still there, directly to the west (i.e. towards the obelisk and Carmelite Monastery) from the Shrine of the Bab.

Another early building is very close to the Monument to the Greatest Holy Leaf. It was a house -- the Yazdi family lived in it during the days of Abdu'l-Baha -- and was then used as the architect's house during construction of the Arc and Terraces. Now I think it might be the offices for the Baha'i Holy Places Office.

Finally, I believe that the monument of Munirih Khanum is most central in the Monument gardens, lying on a straight line from the steps of the House of Justice Building, through the center of the gardens. From that point, to the right is the monument of Bahiyyih Khanum, and to the left, near the Archives Building, are the monuments of the Purest Branch and Most Exalted Leaf, Navvab.